The heART of His Holiness 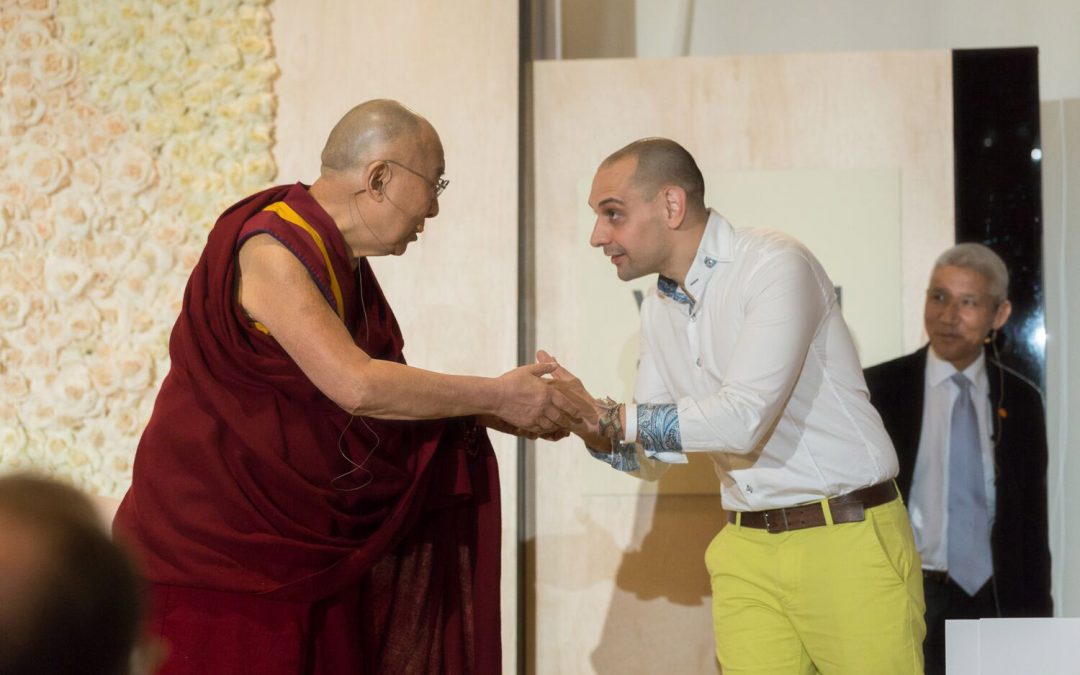 I recently had an opportunity of my lifetimes and was asked by my dear friend Katy Saegar at Harmonica to create a portrait of His Holiness The Dalai Lama for a part of his 80th Birthday Celebration which she was co-producing. It was such a beautiful honor and such a perfect convergence of my two favorite things: Art & Spirit.

I knew myself well enough to know that I wasn’t going to hand in just a simple watercolor study or charcoal sketch. Not only was it his 80th Birthday, but he was also THE DALAI LAMA. I knew who I was drawing, but I didn’t yet know how or what. I started meditating on the perfect image, but mostly all that was coming back were distractions guised as some seemingly rational questions.:

“Does The Dalai Lama even want a portrait of himself?”

“Where is going to hang this thing?”

“How many portraits are there of him already? Aren’t there Dalai Lama portrait calendars?”

And then I asked myself a VERY rhetorical question:

“If I got asked to draw a portrait of the Dalai Lama – what would it look like?”

And that’s when I sketched this: 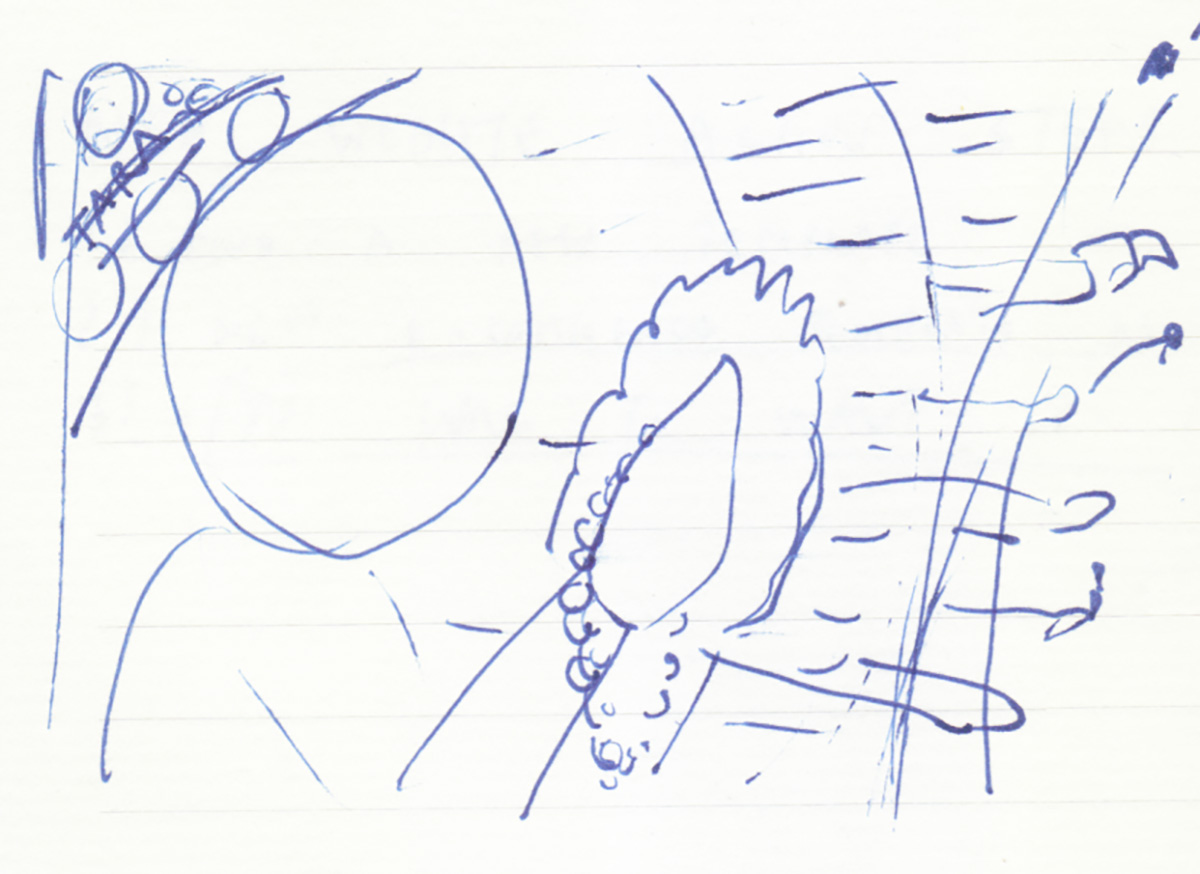 It might not look like much to you, but in that little chicken scratch of a sketch I saw almost exactly what I drew. I knew I wanted to drawing something beyond his likeness, to honor this man, his teachings and what he’s given his life to.

If I was going to do a portrait of him, it would be a portrait of his heart. It would illustrate an ocean of peace pouring out him with 10,000 compassionate arms, it would depict his love of all religions and his hope for their harmony upon the earth and it would show a living Buddha awake, alert and in a prayerful bow to humanity exactly as it is and exactly as it could be.

The portrait itself took over 300 hours. I used a mixture of mediums but primarily colored pencils. And patience. A whole lot of patience.

I knew when starting the project that it was most likely that I would not get to meet the monk himself. This piece was originally intended to be a peripheral part of the event – a roadside attraction as people milled about the arena in between lectures, teachings and special guests paying their regards. It wasn’t until a year later when I got a call from Katy at 10PM informing me that the Dalai Lama was back in town and we had a chance to present the piece to him on stage the next morning at a Compassionate Woman’s Conference. When you get that call – you say yes. I said yes.

We got to the venue the next morning and had to go through FTA-level security. We had a little uncomfortable moment with the hotel conference room border patrol as my photographer friend who came to document this whole big hand-off was almost denied access because he and his equipment had not-been pre-screened. I’m not sure if these guys were ACTUAL Secret Service. But they had fantastic posture, wore sunglasses inside and had the whole ear-piece-talk-into-your-jacket-collar device. Thankfully – after what seemed like a definite “there’s no way he’s coming in with that equipment” we all made it through and we have photos to prove it!

As I stood in the crowd and then from the side stage – listening to the Dalai Lama before I got to walk up and reveal the gift – I was struck with several things.

These are my “Meeting The Dalai Lama” takeaways:

1.) He has a VERY simple and penetrating message: Compassion & Kindness. That was it. Kindergarten simple. He was not advocating for vegetarianism, saying society needed to drop everything immediately and put all our governmental effort towards Global Warming because the planet only had a few short decades left, he wasn’t even advocating for Buddhism. He was not an alarmist. He did not induce fear or warning. His message was simple: kindness and compassion – THAT was how everything could shift – personally, collectively, and planetarily. If we could simply drop all this striving to be someone or something other than who we are and instead drop into our hearts – we would meet the world and each other with peace, presence and open arms.

2.) He embodied confidence in its most essential definition. Most people of stature or recognition, when standing in a sense of esteem or confidence do so backed by their accolades, their work in the world and or their resumes. The Dalai Lama despite being probably one of the most recognizable faces in the world treated himself just like anyone else. He continually laughed at himself and admitted what he didn’t know. He was half child, half grandpa, half Buddha all wrapped up in a joyful wisdom and the remarkable peace of being present with whatever and whoever was in front of him. He Said Thank You. A lot. He didn’t have so much a confidence as much as a calmness. I looked up the word confidence and it comes from the latin word confidere which meant “to have full trust or reliance.” “Con” meaning “with” and “Fidere” meaning “faith.” THAT was the difference. He stood firmly, solidly and unmovingly in his faith. He knew he was doing the best he could. He knew his prayers and messages were sincere. And he believed in the power of the human heart and saw that potential glowing radiantly in each and every person. With such faith in goodness – I can’t imagine how anyone could not laugh at themselves and the predicaments we find ourselves in.

3.) I could not believe this man needed security guards. Who or what would try to harm this peaceful 80 year-old monk? What in the world could possibly be threatened by this man or his message? Whatever THAT was – I realized was what he was speaking against. Largely we are not practicing kindness or compassion –which is why we needed a cheerful bespeckled buddhist to remind us. There IS a real threat. The shadow, the ego, the demons, Mara – whatever that is – it is internal, inside each of us and it is our responsibility to stand in direct opposition to it. Again kindness, compassion and living a virtuous, heart-centered life was both the practice and the goal.

4.) The great cosmic joke. As I finally presented him the piece of art doing my best to live in the moment and be as “this is actually happening right now” conscious as I could. I was struck with a sense of irony – or perhaps more appropriately a Zen Koan. I realized that even if I had gifted him a flower I picked in the parking lot, or a a store-bought birthday cake or actually did do a simple charcoal sketch instead of the 300+ hour collage of symbols and meaning – he would have been just as grateful. Talk about non-attachment! So, I smiled to myself – knowing if given the same opportunity again – I would have chosen the same path. This was the portrait my heart chose to paint and I was beyond grateful that choice led me to this moment. That’s some Dalai Lama reciprocal magic right there – receiving the gift of presence as I was gifting a present. 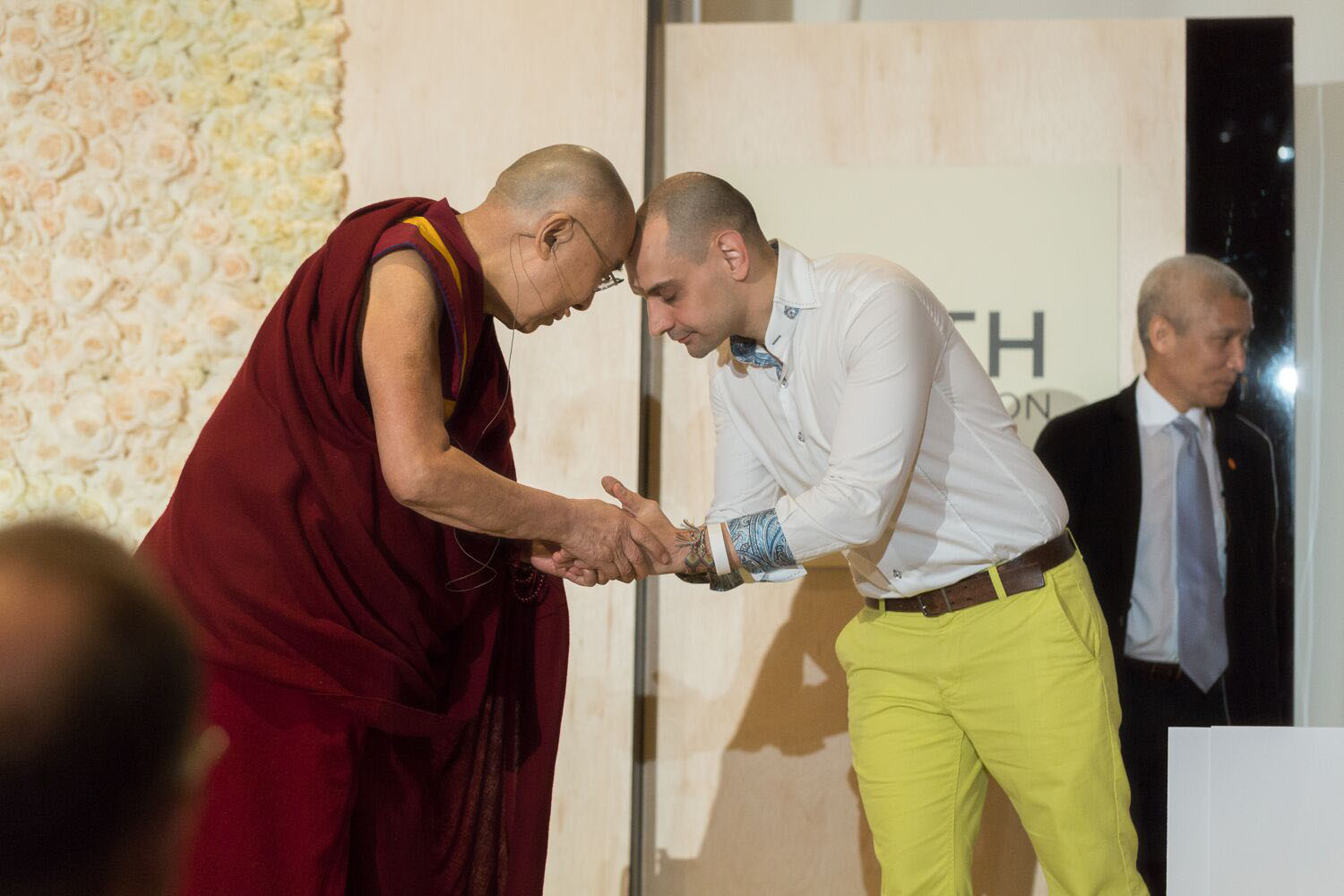 6.)Wrap it in a BOW. As you can see in the pictures we shared a little shaved head to shaved head butt/bow moment. It was amazing. His hands are velvety smooth, his touch is so soft and yet so powerful and he walks in this world but not of it. When someone gives you all of them – even for a moment – you feel it. It is unforgettable. This moment lives in my cells. Meeting The Dalai Lama raised the bar for me on what is possible and what is purposeful within a human life. I am inspired to live mine. 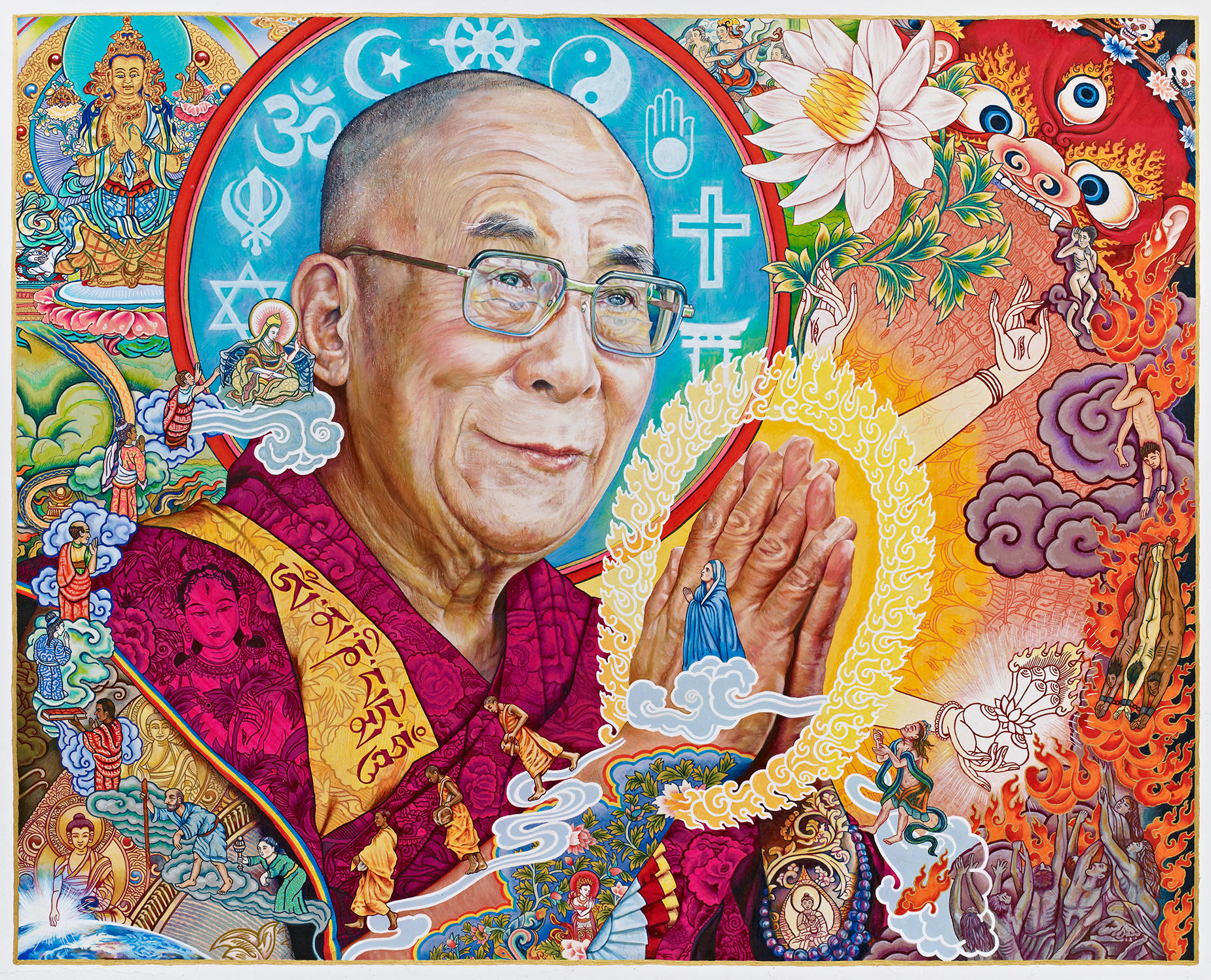